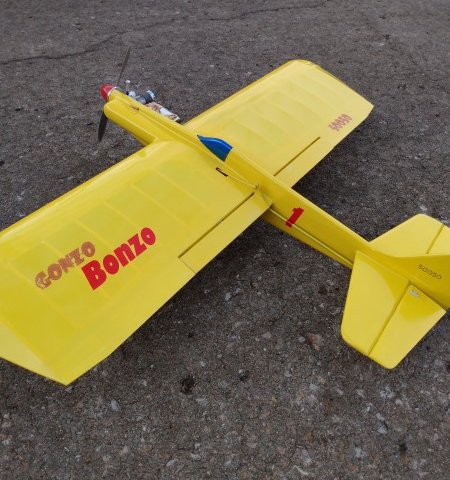 First off, we have some great reporting from Mark Gerber about the happenings in the Denver area. A group has been flying several times a month at the Arvada Associated Modelers field west of Denver.  The club has over 300 members and has been primarily RC.  Several years ago, Jerry Higgins, Chris, and Linda Brainard joined and added a control line circle on the club field using Geotex landscape fabric.  Now there are more than eight control line stunt fliers who belong to the club.

Keith Trostle finished his magnificent Martin-Baker MB 5. It came out heavier than desired, so Keith has been experimenting with turbulators (or “turnulators,” an appropriate slip-of-the-text spoonerism coined by Keith) behind the wing leading edge to increase lift. He’s seen some improvement and is looking for an opportunity to fly the MB 5 at a lower altitude (the Arvada club field elevation is about 6,000 feet).

Chris and Linda Brainard’s 13-year-old grandson, Gavin, is a very enthusiastic flier. Gavin is building a Twister under Chris’ supervision, and looking forward to getting it in the air if a warm day presents itself before spring.

Our esteemed Leader – even though he has a “real job” – has not only found time to write voluminously on the forum, do all the business of running PAMPA, make sure his grandson is properly spoiled, and build another new plane, but also to start molding carbon props. I’m tired just thinking about all that! He’s also found some time to build a new French VG-36 semi-scale stunt model. Dave says it will be powered by a  RO Jett .61, and weigh in at 64 1/2 ounces on about 670 square inches of wing area.  Dave started a build thread about this model on the PAMPA site, but may put it on Stunt Hangar as well.

And everyone is familiar with our own John ‘Doc’ Holliday from Shawnee, Kansas. Doc and Dave Trible maintain a really nice grass circle in their area. Well the old DOC has several planes ready for first flights and is currently working on the Big Snapper by Tom Dixon. He is also working on a Lively Lady, and a Ringmaster Jr biplane.

I am waiting to hear from Jared and Gary Hays from Omaha. I am sure they have been busy this winter. Jared has hit the contests pretty actively the last year or so with quite a bit of success.

And lastly, I have actually built a new plane also. Todd drew this up last year. It’s his take on the Goldberg Buster’s sister ship, the Bonzo. It has 420 square inches of wing area, is powered by an OS 25 FP, and weighs a portly 32 ounces.

I’m waiting for the global warming to melt the snow and provide some good flying weather. I also have a new Folkerts SK-2 under way. Hoping to have it done for this summer. Thanks – Jim Lee. 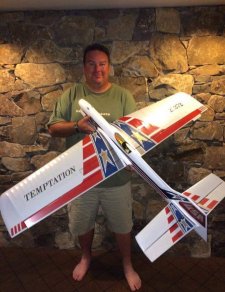