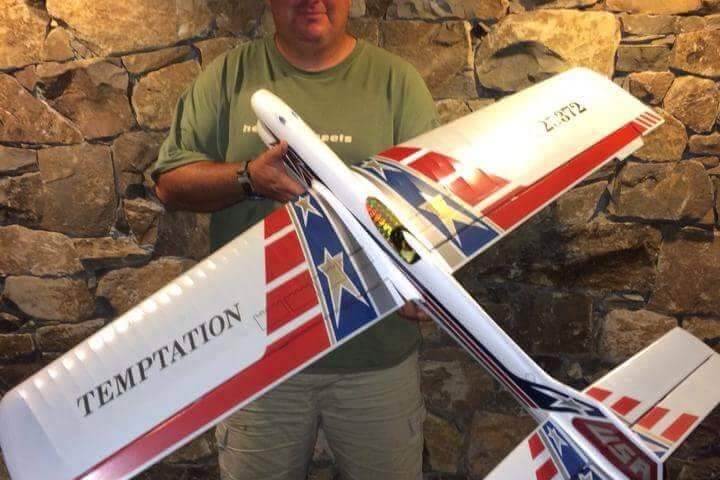 The Omaha Orbiting Eagles were once again invited to the SAC museum indoor airshow in January. The turnout was down this year, most likely due to Covid. However, Jared and Gary Hays and Scott Molck brought many planes to put on display, and Jared flew an electric SIG 1/2A Skyray in the restoration hangar.

Jared has been been working on a few planes over the Winter that he has received from other club members who are either handing down or selling off their fleets. The first plane is a Texas Go-Devil. It’s a .35-size sport plane and when Jared received it, it was ready for finishing.  He decided to go with a red and white Gee Bee-themed paint job, and used Brodak dope and IMRON clear.  It will be powered by an OS Max .35S.

Jared also bought Greg Voumard’s Stiletto 660 that was flown at the Nats a couple years ago. It needs some refinishing on the bottom of the wings, as it was bellied in just before flying in the Nats. Jared also has been rounding up a Ro-Jett .61, a muffler, props, and miscellaneous components that the plane was built for.

Jared also received about six Speed Limit Combat models that Bob Furr designed and built with his own foam wing hot wire jig. These planes were originally designed for Fox .36Xs, but Jared plans to put either LA .25s or ASP .25s on them and make them stunt trainers for anyone that shows up at the field and shows interest, or for his up and coming nephews.

He got with Steve Wilk to have some custom-fit motor mounts made that will allow the motor change.  He also has had an idea to try dueling stunt patterns with these if he can find another pilot willing to try it.

On the back burner Jared still has a clone of Ted Fancher’s 1988 Temptation that he got from the late Jason Pearson’s wife.

It needs a couple coats of clear and it will be ready to go.It was designed/setup for the OS .40 VF on a tuned pipe. Jared acquired a pipe and set of props for it from Randy Smith. 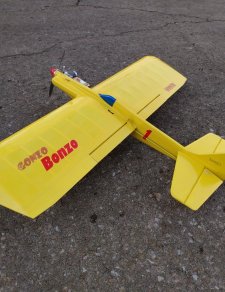