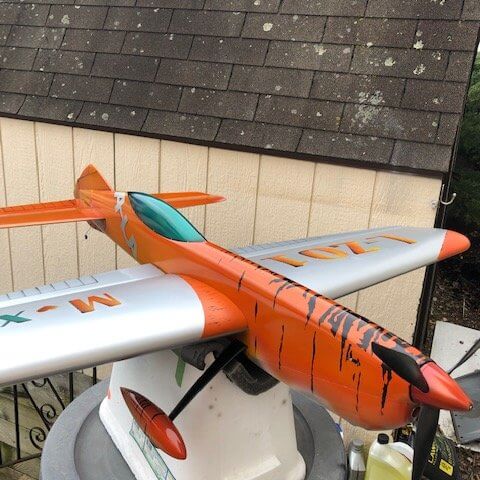 David Chang has finished painting his new “Maxmi”.  Based on Igor Burger’s Maxbee, David completely redesigned the fuselage for a very sleek look.  His paint scheme is just amazing.  He wanted something completely different from the standard straight lines and curves that most people use.  He came up with a tiger cane pattern that is unique.  David said “I don’t like regular stunt paint scheme of straight lines and patches of color.  Instead I like camo and irregular pattern and fog effects of airbrush, and use airbrush to make panel lines and rivets”.  To show me what kind of pattern he was looking for, David sent me some photos of the plane’s wheel pants.  The wheel pant on the left is showing a more traditional tiger stripe pattern and the one on the right is showing, in David’s words, a pattern that’s “twisted from thick to thin, curve to taper in a hurry, all the sudden, with intensity of the color and line change perspectives”.  David is a real artist!  He had a difficult time producing this pattern.  His vinyl cutter wouldn’t “cut it” and he eventually found that brushed on liquid masking worked satisfactorily.  David sent me a photo of one of the rivets he made with the airbrush.  I think it’s just incredible the simulated 3D dimpling he’s been able to produce. He obviously has a very steady hand!

Rick Campbell has been working on converting one of his EuroStyles to electric power.  Rick based the design on Dave Cook’s enhanced Lightning, using all its aerodynamics.  This EuroStyle was built by Steve Yampolsky, but never finished.  Rick and Steve got together and decided it would be a great candidate for conversion.  Rick’s been busy with his other obsession, music, but I think we’ll see this one flying soon.

Dick Carville finished his Extra 300 in white, yellow and red dope.  As a reminder, Dick’s “Extra 300” is based on plans he obtained from Tom Dixon.  Dick used his own airfoil and increased the area of the fully sheeted tail assembly to improve the plane’s flying characteristics.  As always, it’s a flawless finish.  We were there for the maiden flights of the Extra 300.  It flew very well, but after a few minor trim changes, it flies extremely well.  Great job Dick!

Saramarie won a Sig Banshee at the Nat’s (beginner) last year which I built over the winter.  I converted it to electric and shortened the nose (to bring the CG back a LOT).  She flew it’s maiden flights and it’s a great flier and she loves it.  It’s such an experience to fly at the Nat’s, and the great prizes that are offered for the beginner level makes it that much better.  She plans to fly the new Banshee at this year’s Nat’s

Warren Dillman sent me an email describing Paul Busheme’s newest “experiment”.  Paul decided he wanted to try flying a control line model airplane from outside the circle with an R/C transmitter.  While we might question why one would want to do this, it’s still an interesting engineering challenge.  Paul built a pivoting platform that housed the R/C components.  A servo connected to a bellcrank, which then connected to the flying lines (and to the airplane), gave him control of the elevator.  Check the photo of the system and it will be easy to see how it works.  Paul made a successful flight, though I didn’t see any stunts!   He is currently working on adding a hinge that will allow overhead maneuvers.  A video of the flight can be found at https://www.dropbox.com/s/im504flx53kh04y/MAH00135.MP4?dl=0.

My new plane, which I named Titan (because Titan is a moon of Saturn and my plane uses a Saturn wing) is ready for the clear coat.  It’s an in-line design and the fuselage is fully molded using a combination of the techniques described by Chris Cox and Paul Walker in the 2018, issue 1 edition of the Stunt News and the techniques described by Bob Hunt during the construction of his Rounder, documented in his “Tru-Fit Fuselage Construction” DVD.  It’s light, very stiff and doesn’t have any flat sides, which is the aesthetic I was looking for.  A few Stunt News issues ago, I described an experiment where I measured the torsional stiffness of my Saturn’s fuselage as I added diagonal bracing inside the fuselage.  The new Titan’s fuselage is just as stiff, without any diagonal bracing, as the Saturn’s with full bracing.  Pretty cool!  The Titan weighs 60 oz before the clear coat and should weigh 62 oz ready to fly.  The Saturn also weighed 62 oz, but used 1/16” balsa fuselage skins.  The Titan used 3/32” balsa, so the molded fuselage technique could be lighter than a “standard” fuselage, if I ever get up enough courage to try using 1/16” balsa! 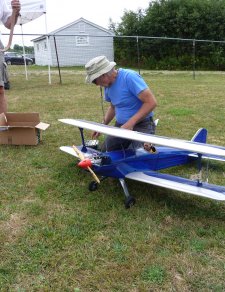