The legendary field at Flushing Meadow Park is a true field of dreams! “if you hold it, they will come” And they did come, not only in constants and spectators, but more importantly the legends of Flushing came out to fly with us once more as they do each year.  On a Saturday in early September, the New York Control Line Stunt team (NYCLST) held the Annual Gene Schaffer Memorial Cup Stunt Championship.

This year’s contest was well attended and supported, and the day was just fantastic, weather could not be better, and the food was out of the world (Thanks Jose and Atina Modesto). The flying was even better! We had all 4 PAMPA classes in effect, we had 19 pilots all flying for a win!

The day started out with the normal pilots meeting which focused on a fun and safe event and this year also had a moment silence for Vic Macaluso who we unfortunately we lost this past year. We were fortune enough to have one of Vic’s last models in attendance as well. After the pilots meeting, we warmed up the judges and started the contest.

Beginner was up first, and we had 2 pilots competing and one was a retread who hasn’t been out flying in years and just came out it fly and got roped into a contest! Audrey Vasilik took the win, with Mike Levell coming in second! Intermediate had 4 pilots and a new up and coming flyer won his first contest in Intermediate, Andrew Jaworski! Coming in second was Jerry Vasilik and in third Josef Jaworski. A father and son contest and Andrew beat out his dad!!! Advanced had 6 pilots and it was quite a battle between the top 4 pilots the battle for third was decided by 1 point! George Waters beat out Steven Daly on his last flight to capture third place. Coming in second was carl Schafer and Bruce Jennings took home the most hardware of anybody! Winning advanced, the Bob”Champione”Lampoine Concours d’ Elegance award, and the Advanced Vic Macaluso High Point Award! In Expert, we had 7 pilots and the qualifying rounds saw almost perfect air. After both rounds of qualifying were over, we had the Top 5! Bob Hunt, Joe Daly, Jose Modesto, Tom Luciano, and Will Demauro. As a tradition, we allow Top 5 to pick their flight and the #1 qualifier gets first choice and Bob Hunt being #1 he chose the coveted last flight! (Which turns out to be an important choice!!!)

For the Top 5! It started late in the afternoon and the wind had changed direction, speed, and added in a few bumps!!! Nothing like adding some drama! What was interesting was as each flight was finish the air would get a little better and having the last flight was a slight advantage and Bob Hunt took full advantage and won the Gene Schaffer Memorial Cup! Congratulations to Bob Hunt, it was some sight to see! And now for the rest of the finishers, Joe Daly 2nd, Jose Modesto 3rd, Tom Luciano 4th, and Will Demauro 5th.

A few closing comments about this event, one we must thank the Judges, tabulators, and score runners for doing a really fantastic job. With these folks, there is no event! Second, there is just something about a Flushing contest that is magical. Seeing people like Bob Hunt come there and the twinkle in his eye and the memories that just flow out from everyone is special. Listening to Jose Modesto tell his story about the first time he saw Vic Macaluso fly his first Crusader at Flushing and the wingover! For me, I got the honor to fly a memorial flight for Vic Macaluso with his last built F-14 during the lunch break. Truly a highlight in my stunt career and a great tribute to Vic! 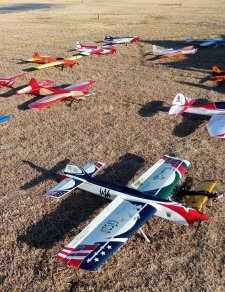 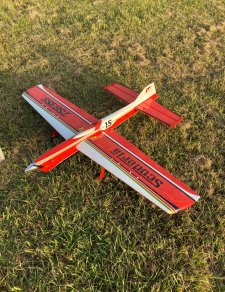