2020 is coming to an end! Finally!! Coronavirus vaccine approval is near so hopefully there is a light at the end of the tunnel and we can all get back to life like it was before the pandemic, and we can all enjoy going to contests!  Not all of 2020 was bad though, District VIII was able to host a few contests in the fall and as far as I am aware, nobody was infected during those contests.  The NATS were a go, and District VIII did extremely well this year! This year also provided a lot of time for everyone to get some new airplanes built.  I was able to get two airplanes in the finishing stage, a P-51 and airplane styled to resemble an F1 car.  The P-51 got put on the back burner in favor of the F1 plane because the workmanship was a little better.  After the F1 plane is finished, I will get back to the P-51, fix the issues on it, and get it finished.

Mark Troutman sent me a few pictures over the course of the year of new airplanes he finished.  John Hill finished three airplanes during this year.  Mike Scott finished a new Max Bee that I’m looking forward to seeing sometime soon in flight.  Mike is also working on another airplane for a PA 51 as well.  Doug Moon has been busy restoring a Corvette in between weekend flights in Dallas.  Steve Moon finished a Nemesis that looked great but had an unfortunate accident with it just prior to the NATS.  It is being rebuilt as we speak so it will have a second life.  Joe Gilbert has a new NATS plane in the works as well.  I bet it will be painted his trademark blue with British insignias.

The first contest of the year for a few of us was the NATS.  Thanks to my work schedule changing due to COVID, I was able to attend for the first time in three years.  District VIII as a whole did extremely well.  John Blanchard finished 7th and Crist Rigotti 6th in advanced.  John took off the top of the rudder on his last qualifying flight and it was in need of a rebuild.  Jake Moon drew a custom decal on the replacement rudder that had everyone in the hotel room doubling over in laughter! In open, Joe Gilbert finished 17th, Steve Millet finished 16th, Steve Moon 10th.  Don Cranfil finished 8th and I had my highest placing at the NATS yet with 6th, just a few points from making the top 5.  I believe this was Don and Steve Moon’s highest placing at the NATS as well! Steve Millet also took home the concours trophy with his beautiful Ryan’s Eagle!  Unfortunately for Joe, he ran out of fuel on his first official flight entering the four-leaf and lost pattern points because of it.  Joe was flying extremely well all week and was in the running for the top 5 as well.  The NATS isn’t all about competition, the camaraderie is second to none and it’s one of my favorite parts about going to the NATS.  If anyone is still considering going, it’s a must in my book! I’m already looking forward to the next time I get to make a trip to the NATS.

The contest circuit for the fall in district VIII continued on this year as well.  The turnout was a bit lighter than in years past, no doubt due to the pandemic.  Those that attended had a great time.  I was only able to make the Tulsa contest due to my work schedule.  The wind blew most of the weekend but the flying was really fun as was hanging out at the field from 8am until sunset.  I arrived in Tulsa a couple days early, where I took my classic plane and got it completely retrimmed thanks to Joe Gilbert and John Blanchard.  Just about everything was warped on the airplane, and about 20 flights later and many twists with the heat gun it became a pretty good classic stunt weapon.  All the other contests had good weather, and I’m sure a great time was had by all!

Building season is upon us once again now that winter is near; maybe building season never really ended due to the weird circumstances of this year.  But a new year is around the corner, and that means a new year of contests, new planes, and new memories! 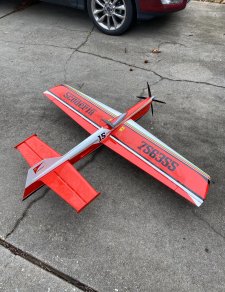